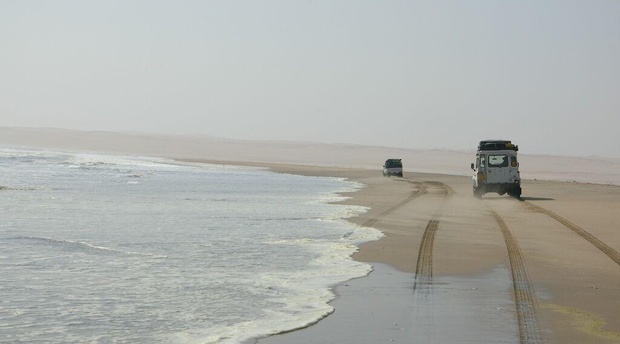 The Conception Adventure is an unique adventure taking place in the vast sand sea of the Namib Desert south of Walvis Bay offering the ultimate challenge for thrill seekers with off-road endurance and a taste of adventure.

The Namib Desert follows the coast of Namibia for approximately 2000 kilometres.
It varies in width from 80 to 200 kilometres where it meets the Namib Escarpment. The most important climatic feature of the Namib Desert is its sparse and highly unpredictable annual rainfall. The annual mean ranges from 5mm in the west to about 85mm along its eastern limits.

Departing early morning from Walvis Bay, our aim with this trip is to enter the desert in the Linear Dune Belt. Linear dunes develop where wind pressures are nearly equal on both sides of a dune, making them some of the biggest dunes in the Namib. You will experience the dramatic change in environment as we progress. Encountering dunes that formed by sand compacted into sandstone during more humid phases 6 to 8 million years ago will ensure breath taking views. Heading further southwest into the “sand sea” we make our way towards Conception Bay. On the way to Conception Bay massive dunes are negotiated and once again ever-changing scenes of beautiful landscapes are experienced. Driver skills are improving as the dunes offer more and more challenges. The Dune straits are massive, and the dunes are even more impressive as we enter yet another dune faze. Some of the dunes are in excess of 150 m high! The night is spent under the desert sky!

We make our way to the ‘ghost towns’ of the desolated, previous prohibited ‘Diamond Area no 2’. From the top of the dunes one will experience a ‘bird’s eye view over Conception Bay as we get closer to the mining towns. By now you are addicted to dune driving, and are craving more of this adrenalin rush!! The ever-changing scenery is once again awesome!

It is in this area between Conception Bay and Meob Bay the mining settlements were established and no form of engine-driven transport was available during the first 15 years of exploration. Transporting of supplies and mine equipment was effected mainly from Swakopmund by ship and the cutter Viking via Sandwich Harbour, Conception Bay and Meob Bay. Various shipping casualties occurred, such as when the Eduard Bohlen intended to off-load mining equipment and was consequently lost at Conception Bay (1909). During 1912/1913 a light railway from Conception Bay to Conception Water and an 80-kilometer pipeline linking the settlements were constructed. It is not totally clear as to how many pre-fabricated buildings were erected at the various settlements, as only the foundations of some of these are today still visible.

“Langewand” and Sandwich Harbour
The dune belt opens up between Meob Bay and Conception Bay, but immediately after Conception the dune belt stretches right onto the beach. From Conception Bay you will be driving on the beach with magnificent scenery. You will experience freedom – BIG TIME!! We are heading northwards towards Sandwich Bay. En route the wrecks of the Eduard Bohlen & Shawnee are visited. Passing ‘Langewand’ where massive dunes end in the sea, given a very limited time span to negotiate this stretch of beach. After Langewand the trail once again leads into the dunes, circumnavigating the Salt Pans ‘extensions’ of Sandwich Harbour. The dunes are still getting progressively larger to offer an ever-changing new experience of ultimate dune driving. The night is spent approximately 1.5 km from the sea close to Sandwich Bay.

From Sandwich the trail enters the ‘Roller Coaster’, a series of massive ‘roaring’ slip faces, not only giving you a new thrilling experience but also offering breathtaking views of Sandwich Harbour and a panorama of Sandscapes.

The trail ends at Walvis Bay at approximately noon.