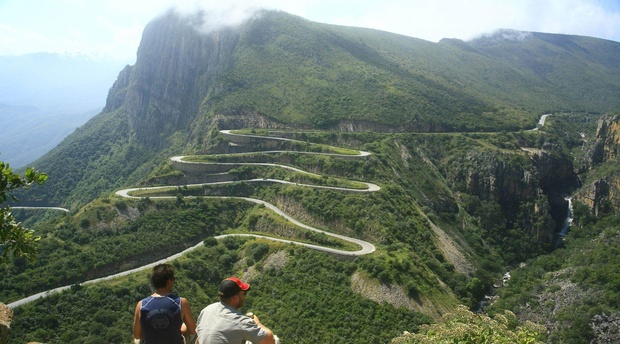 Angola is mysterious, Angola is unknown and Angola is untouched by the tourism masses. If you are looking for a different adventure, don’t think twice. This is a programme packed with highlights.
While driving, the nature will continue to amaze you with awesome rock formations, numerous dry riverbeds, wide open beaches, beautiful Welwitschia plants and an untouched coastline.

The area also has its share of history. The remains of the war can be seen in buildings covered in bullet holes and the red and white paint on trees marking where land mines were. You will come across shipwrecks, the ghost town of Tombua and visit the bustling port of Namib, formerly known as Mocamedes.

Definite highlights and bucket list experiences will be driving through the Iona National Park, stopping at Foz du Cunene where the wind might blow you away, negotiating ‘die Doodsakker’ (Death Acre), driving the Serra da Leba that rises over 1 800 meters above sea level and admiring the view from the cliffs of Tundavala.

Angola is the place to be. Start planning, packing and meet us in Ruacana.

Plan your itinerary to arrive no later than 17h00 at Ruacana Eha Lodge. Attend a briefing from your guide and meet your fellow travellers.
Accommodation options are limited in Ruacana; therefore, we suggest Eha Lodge. (Accommodation for this night is not included in your tour package. Please contact your consultant to assist with either camping or lodge accommodation at Eha Lodge.)

** Please ensure that you have filled up on fuel, wood and water before arriving at Eha Lodge.

We will have an early morning departure for the Ruacana border post as crossing the border can be time-consuming. En route you will soon spot the mist of the Ruacana Falls where it plunges 120m downwards. We cross the border and once all border formalities have been completed, we travel in a western direction towards Oncocua. The road is challenging and driving will be slow. This will allow time to take in the beauty of the area, which might remind you of Namibia’s Kaokoland. Depending on our progress, we set up camp en route.

As we travel further towards the mouth of the Kunene River we might come across the nomadic people of this area … the Himbas. The tribes move around the area and even cross the border back to Namibia depending on water and food availability for their animals. Seeing them is therefore not guaranteed, but if you do come across them, please respect their culture and let your guide first obtain permission for photographs, etc.

We head for the Iona National Park. The park covers an area of about 15,200 km²; the largest in the country. Before the independence of Angola and the Angolan Civil War, Iona was an "animal paradise”, rich in big game. However, as is true for most Angolan national parks, illegal poaching and the destruction of infrastructure have caused considerable damage to the once rich park. The park is also known for unique flora and incredible rock formations.
Iona is Angola’s oldest and largest national park, it was proclaimed as a reserve in 1937 and upgraded to a national park in 1964. We will be driving through the park to our overnight stop en route.

Today we reach the mouth of the Kunene River.
An amazing picture awaits you where the mighty Kunene meets the Atlantic Ocean. In the lagoon, you will find rich birdlife and across the river on the other side; a picture of yellow Namib sand tumbling into the river. From the mouth of the Kunene we turn north to where we take on the first part of the Death Acre before setting up camp for the evening.

The name for this stretch of beach between ocean and dunes goes back to the time when the people left South Africa due to the growing pressure of the Brits and moved to what is known today as Angola. They only had ox-carts to travel with, which was much slower than our 4x4 vehicles of today, which explains where the Death Acre got its name from.

Today we negotiate another part of the Death Acre should the tide allow it, to Shambesana. The Death Acre must be driven during low tide. It is important to have an experienced guide with you to navigate your safe passage through hidden rocks and muddy pools. It is an amazing stretch of beach and only one of two in the world where the dunes run perpendicularly into the sea. Wow, this is what off-road driving is all about … timing, adrenalin and adventure. We set up camp behind the dunes.
If the tide is not favourable for beach driving, an alternative route via the beautiful dunes will be taken.
We head for Shambesana with its beautiful sandstone cliffs.

Today we will travel to Namibe. The city was founded in 1840 and until 1985 had the name of Mocamedes. Namibe has the third largest port of Angola, after Luanda and Lobito. It is also the terminus of the Namibe railway. The town has a gigantic market where you can buy nearly anything. Today you will also have some time to wet your fishing lines and maybe catch your dinner.

Today we depart for Lubango. We approach Lubango via the spectacular Leba Pass. The road spirals like a snake with 12 hairpin bends from sea level to 1845 meters above sea level. It is believed that the pass was designed by a Portuguese lady who passed away on the day that the construction of the road was completed. Humpata is 20 kms from Lubango. It has a strong South African connection as it was here where the Thirstland Trekkers settled in 1881. The Monumento do Christo Rei keeps a watchful eye over the city of Lubango. The white marble statue is 30 meters high and situated on a hill near the city. The statue is a smaller version of the one in Rio de Janeiro and Lisbon.

We break up camp and turn our noses towards the border leaving the main Cahama to follow an old “kaplyn”. A “kaplyn” is a military term that describes an unscrambled piece of land on the battlefield between two fighting powers where trackers watch for traces crossing from one side to the other. During the time of the Bush War lots of activity and operations took place in this area.

Today is the last day we break up camp as a group. The border is in sight. We travel to the border post and should cross the border at Ruacana around 11:00. Once back in Namibia it is time for sad farewells. Each person is responsible for their own onward travel arrangements. Please ask a consultant to assist with bookings for your journey home.

Please note that the time is only an indication of when you will reach the border and is not guaranteed.